High resolution mass spectrometry (HRMS) can provide crucial information on proteins, including the identification and quantification of post-translational modifications (PTM) 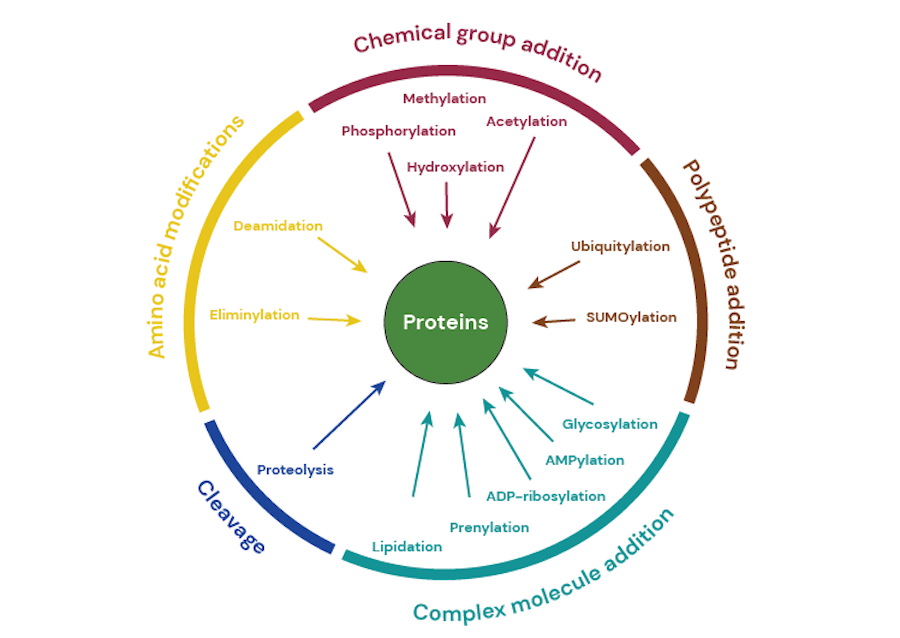 Get unprecedented insight on the biology of your samples

Post-translational modifications, or PTMs, are physical alterations that occur in a regulated manner to almost every protein after their initial translation. While the role of some PTMs is still unknown, scientists now understand that most of these modifications are implicated in the regulation of a plethora of biological processes such as cell survival, energy metabolism and signal transduction, just to name a few. Mechanistically, PTMs are the way cells detect modifications in their environment, convey a signal to the appropriated organelle and produce an adapted biological response to the stimulus.

PTMs are very broad in nature and can be either reversible or irreversible. According to their impact on the target protein, PTMs can also be categorized into five distinct families. Below is a non-exhaustive list of PTMs that can be found in one’s sample:

As the main way to regulate cellular processes, PTMs are very tightly modulated and generally occur either transiently and/or at very low levels. Therefore, the total amount of one specific PTMs is very small when compared to the whole proteome. This means that even with a top-of-the-line mass spectrometer, we need to perform some kind of enrichment of the PTM of interest to successfully perform a quantitative LC-MS/MS experiment. The general workflow for a PTMs analysis using mass spectrometry is the following:

The data for PTM-targeted proteomics experiments will be delivered in a spreadsheet. We will provide basic statistics such as average, standard deviation and %CV and fold change for group comparisons in a peptide-centric manner. Depending on the number of replicates, we will generate either a confidence interval or a Student's T test to assess significance. Besides, we will provide an interactive data tab where you can visualize relevant information for a given protein. If needed, we can also generate more advanced statistical analyses, such as a Principal Component Analysis (PCA), heatmap clustering and gene ontology.

Contact us for all your needs in PTM analysis