Identify your protein of interest using state-of-the-art LC-MS/MS technology. Over the years, we have perfected our protein identification workflow to provide fast and efficient services to our customers. This workflow is compatible with in-gel digestion of silver nitrate or Coomassie blue stained proteins, as well as for proteins in solution*. 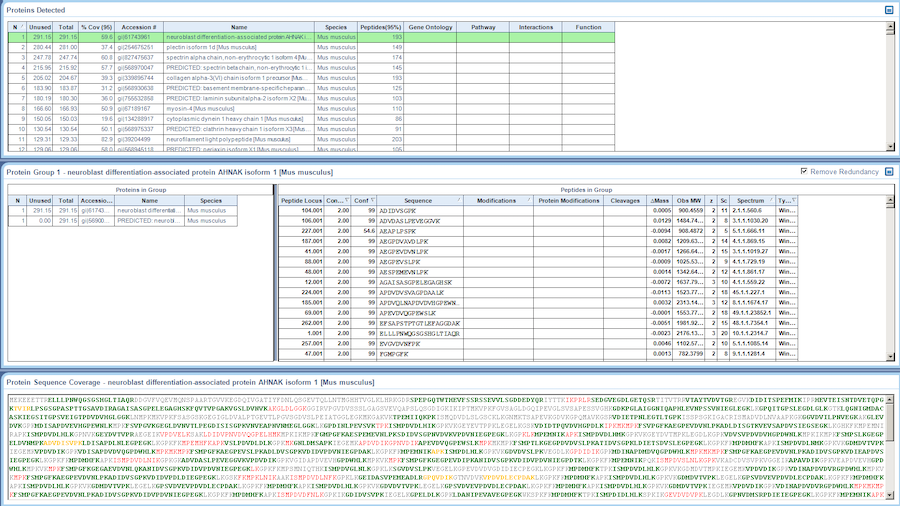 Screenshot of a protein identification software

First, we wash the gel pieces with successive dehydration/rehydration cycles in MS-compatible solutions. In a second step, we break intra- and inter-protein S-S bridges using a reducing agent and block the free cysteines by alkylation. The reduced proteins are then digested directly in the gel with a protease that cleaves after known residues. Following digestion, we extract the resulting peptides from the gel by successive rounds of dehydration and sonication. Finally, these peptides are purified using reversed phase SPE (solid phase extraction) and injected in the mass spectrometer.

Before entering the MS, the peptides are further separated using a liquid reversed phase chromatography system that is directly connected to the mass spectrometer. This results in a better acquisition depth, since the additional separation gives the MS enough time to adequately sequence the peptides that are the sample. Once in the mass spectrometer, peptides are fragmented in smaller pieces and recorded by the instrument's high resolution detector using a workflow called Data Dependent Acquisition (DDA). This process yields a list of precursor masses with its associated list of fragment masses.

To obtain the identity of the proteins that were in the sample, we load the data in a protein identification software. This software associates the recorded list of masses to a list of peptides and attributes them to one or more proteins. Of note, this process also reports any post-translational modification, chemical modification or amino acid substitution that could be recorded.

Reports of protein identification consist of a spreadsheet with a list of probable IDs, as well as a score and the number of peptides associated with every ID. We will also provide the false discovery rate (FDR) file generated by the identification software.

My personal experience of collaborating with PhenoSwitch Bioscience was really amazing and great. Ribosomal protein paralogs have very limited number of amino acid differences. If it were not for PhenoSwitch, it would not have been possible to get such a high quality identification and quantification of duplicated ribosomal proteins in yeast. I am highly indebted and thankful for their perseverance, commitment, help and guidance during the tough times of optimization. If you you need to use MS for identification and quantification of your molecules, I strongly recommend you to talk to these guys!
Mustafa Malik Ghulam, Post Doctoral Fellow, RNA Therapeutic Institute, Umass Medical School, Worcester, Massachussetts