Sometimes, you need to confirm the whole sequence of a protein. Using a combination of several proteases and high resolution mass spectrometry, our experts will determine the exact amino acid sequence of your target protein. 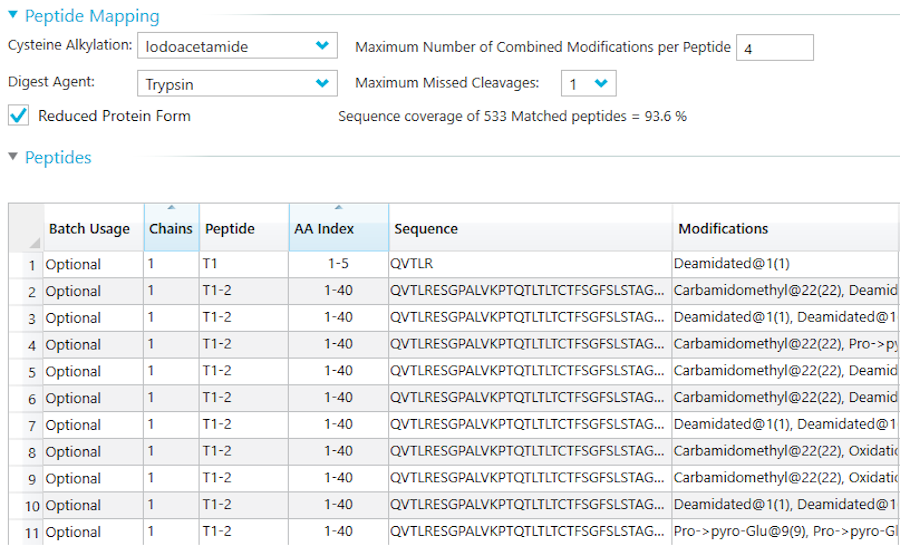 Screenshot of a peptide mapping software

The first step of confirming the complete amino acid sequence of a protein by mass spectrometry is to cut it into smaller peptides using a protease. The enzyme of choice for many proteomics workflows is trypsin, as it reliably cuts after every lysine and arginine residue (with some exceptions). However, for some regions of your protein, a tryptic digestion may produce peptides that are either too small or too big for a proper detection by the machine. This would result in a lack of sequence information for these regions, which is undesirable for a peptide mapping experiment. To prevent this, our experts will first proceed to an in silico digestion of your protein of interest to determine which combination of protease would yield peptides that, when bio-informatically merged, cover 100% of the sequence. We generally achieve full coverage with a combination of two to three different proteases.

Once the choice of proteases is set, we will perform the real-life digestion of your protein in the lab.  Peptides resulting from each digestion will be analyzed on a short LC-MS/MS gradient using a data-dependent acquisition workflow.

A protein identification software will first associate the recorded data to a peptide sequence for each protease. This will result in a list of regions that were covered by peptides in each individual protease. Finally, we will pool and align every confirmed peptide from each digestion on the theoretical sequence of the protein to get the final peptide mapping.

Peptide mapping data reports include the list of every detected peptide, separated by protease. We will provide the total protein coverage, as well as the confidence associated with every peptide.